Spring has arrived with 15°C+ and blue skies. This weekend was dedicated to heavy pruning of the Abelia, roses (maybe a bit late), Lavenders and every other shrub close to the terrace.

Sunday the shredder was active during 2 hours and shredding stuff into 6 containers – mulched.

I wanted to install the rain-water-gathering container. I noticed that the inside-layer of the 1-meter-long-split-repair, done two year ago using epoxy-resin, has detached. This split is still kept-together with the external epoxy-layer but it won’t sustain the pressure of 500l water. I will need to renew the inner layer. Talking to a neighbor gave me the idea of roughening the surface so that the epoxy will better stick.

In addition to that the overflow-pipe has to be repaired. This was the initial work I wanted to do, but now I the split became priority. Luckily I have the second 500l container (which doesn’t have a overflow-protection) which I installed, once full, it will be disconnected again.

The crocuses are at their best right now. Close to the magnolia are two new crocuses I haven’t seen before, quite big compared to what I’m used to: a 10cm high flower stem. 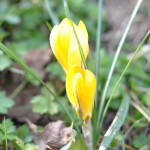 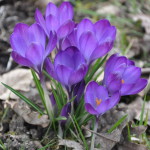 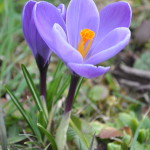 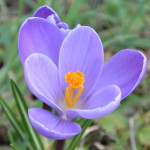 I observed bird-activity on one of the nesting boxes. Nothing to get excited. They were only visiting.

In one of the vegetable bed we sowed green manure in form of pea. To be dug under in 6-8 weeks. Hope the seeds are still working.