In April I did my usual running in the early morning (between 6 and 7 o’clock) . My trip makes me run between fields, forests and other nice, silent places.

One day, the sun was just coming up, I was running between the fields where the wheat was now about 30 cm high. My long shadow fell on this wheat-field and there it was: I noticed something strange around the shadow of my head. There was a quite bright glow. As I moved on, I noticed that this glow was moving with me. It did so, for several hundreds of meters.

At first I thought I had something in my eyes which causes this strange blur, but not so. I’m always carrying my smartphone with me and I thought, can I take a picture of it? Nobody would ever believe me if not. I took these two pictures: 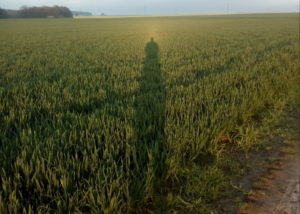 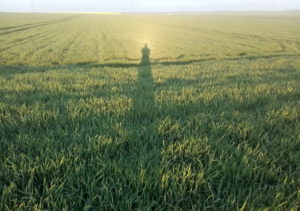 Well, seeing them on the phone I knew that I had no problem with my eyes. This glow was really there.

As written previously, I’m a big fan of the StackOverflow Q/A-sites. Fortunately there is page dedicated to physics and thus I asked a question. Within hours I got an answer telling me that this is the so-called Heiligenschein-effect. Something with light reflection on water-droplets which are sitting on grass due to the sun being very low.

A comment to the answer from roadrunner66 says “[..] You are the only one who sees the brighter spot, another person looking at your shadow wouldn’t [..]”. So only the observer can see these reflections? The glow is actually not around my head, but around my eyes? It was easy to to proof: on one of my next trip in the same conditions and place I took the following picture. I simply hold my smartphone away from my body and took a picture – here is what has been captured: The glow is around my phone, or better, around the image-sensor.

This is something everyone can observe. Here is what you need: